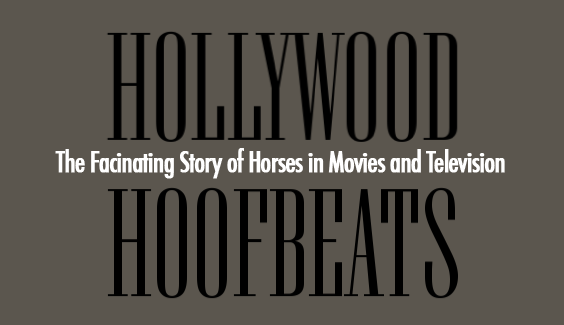 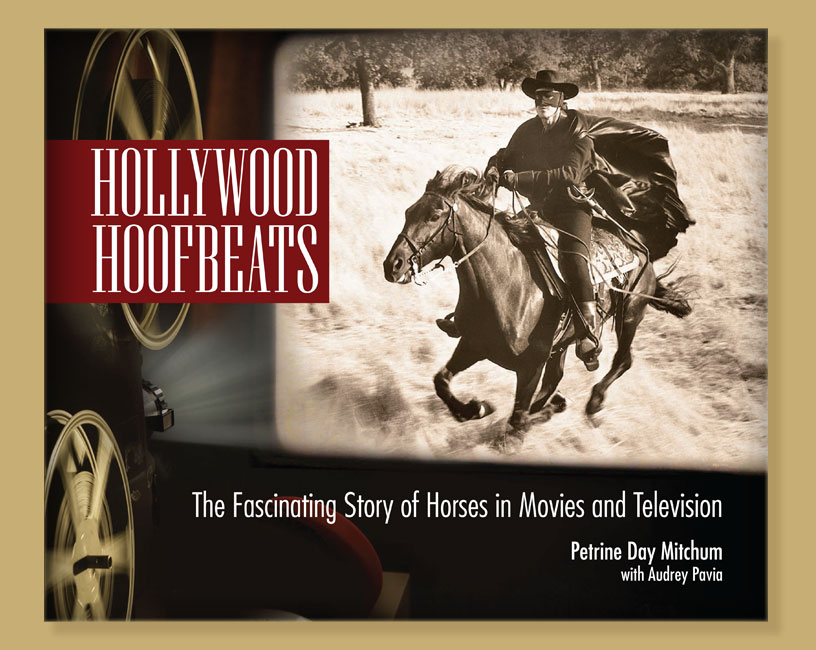 Irvine, Calif. (Oct. 15, 2014) – In 1878, a horse named Abe Edgington, pulling a small carriage, provided the first “moving picture” the world had ever seen. Created by photographer Eadweard Muybridge, this historic moment has become known in motion picture lore as “The Twelve Frames that Changed the World.” It was only fitting that the birth of the film industry began with a horse stirring the imaginations and touching the hearts of audiences around the world–a theme that continues to this very day. Now, I-5 Press, the leader in special interest publishing, presents the second-edition release of Hollywood Hoofbeats by Petrine Day Mitchum with Audrey Pavia.

The extended and updated second edition of Hollywood Hoofbeats is arguably the most complete collection of stories and photos documenting the history of horses in American cinema. Hollywood Hoofbeats is packed with behind-the-scene stories, first-account narratives, rarely-seen photographs, lobby cards and illustrations, offering a rich resource for movie buffs and horse lovers alike.
“In the course of writing Hollywood Hoofbeats, I watched scores of movies,” says author Petrine Day Mitchum. “Watching so many films of multiple genres, I began to realize that the movies as we know them would be vastly different without horses. There would be no Westerns–no cowboy named John Wayne! No Gone with the Wind, no Ben Hur, no Dances with Wolves, no Gladiator, no Seabiscuit or The Black Stallion. In fact, the movies might not exist at all since the entire motion picture industry evolved from an experiment with a camera and a horse.”
As the daughter of screen legend Robert Mitchum and an avid horsewoman, Mitchum brings her enthusiasm and knowledge to this extensive volume. With thoughtful and compelling narration, Mitchum swings open the stable doors and welcomes readers into the fascinating lives of equine actors and the movie sets they called home. From the beginning to the end of their careers, every horse’s story is told in mini-biographical style, giving readers a complete understanding of the lives of these remarkable horses in front of and behind the camera.

Hollywood Hoofbeats shines the spotlight on horses past and present, as well as their owners, trainers and co-stars by featuring:
• Profiles of famous horses including Trigger, Champion, Silver, Mr. Ed and more
• Human co-stars such as Tom Mix, Roy Rogers, Clint Eastwood, Robert Redford and dozens more
• Behind-the-scene stories from the sets of historic films from D.W. Griffith’s The Birth of a Nation to Spielberg’s War Horse
• Secrets behind amusing horse tricks and crazy antics
• Descriptions of death-defying and dangerous stunts
• Hundreds of illustrations, backstage photos, and poster art
• And more!

Hollywood Hoofbeats would not be complete without an earnest look at the early days of the stunt horse. With truth and reverence, Mitchum reveals some of the more dangerous stunts horses were forced to perform before the days of animal rights and regulations. Hollywood Hoofbeats chronicles those harrowing times in stark detail and brings to light the sacrifices these horses made as they helped pave the way for increased laws and humane treatment for working horses and other animals. As Mitchum points out in her book, “Time and time again, movie trainers stress that the single most important ingredient in training a horse for any kind of work is trust.”

Hollywood Hoofbeats is a visual delight sparked by high-definition photos intertwined with a stylish movie-themed design and a sturdy soft cover binding featuring flaps for easy bookmarking. As attractive as it is entertaining, Hollywood Hoofbeats is suitable as a coffee table display or as an addition to a collector’s library.

Hollywood Hoofbeats is a revealing and affectionate record of where equine actors have been, where they stand today, and how they continue to influence the future of filmmaking. After reading Hollywood Hoofbeats, audiences will never look at another horse-on-film the same way again. From the first frame of Muybridge’s “Horse in Motion” to the equine-like creatures in Avatar, no other animal has contributed more to the film industry than the horse. And no book delves deeper into their celluloid history than Hollywood Hoofbeats by Petrine Day Mitchum with Audrey Pavia.

“While it is virtually impossible to cite every horse who left his mark on celluloid, with Hollywood Hoofbreats, I have attempted to pay tribute to the spirits of the marvelous equine actors who have traversed cinema’s varied terrain since its inception,” adds Mitchum.
Hollywood Hoofbeats will be available in November 2014 at online booksellers and fine bookstores everywhere.

About the Authors
Petrine Day Mitchum is a former Hollywood story editor and script analyst for The Ladd Company, Pathe, TriStar Pictures, and DreamWorks. She has made short films for Saturday Night Live and contributed to numerous publications as a photojournalist and essayist. She lives in California’s Santa Ynez Valley with her two rescue dogs and two American Quarter Horses, Genuine Rascal Jac and Photo Op.

Book Excerpts:
“With the Old West disappearing and the Western film flourishing, a new breed of actor rode onto the scene-literally. Many expert horsemen looking for ranch work at the turn of the century wound up displaying their skills in the traveling Wild West shows. As the popularity of these shows began to wane in the early 1910’s, a number of cowboy performers moved on to the picture business.”

“Over a hundred and twenty years since Eadweard Muybridge first photographed the horse in his groundbreaking motion studies, James Cameron and his award-winning team of special-effects wizards have taken capturing motion to a new frontier, yet the basic mechanics of the moving horse remain a vital component of the creation of exciting visual entertainment.”

“Rex made his debut in King of the Wild Horses, the film that gave him his nickname, and became an instant hit. Hal Roach Studios quickly capitalized on Rex’s appeal with Black Cyclone (1925) and The Devil Horse (1926). In all these films, he was perfectly typecast as a wild stallion. On one location, Navajo on the film said that Rex had a devil imprisoned in him. Some even wore amulets against his ‘evil eye.’”

“Like his famous predecessors, Fritz, Tony, and Champion, Trigger inspired movies that revolved around him. One of the most beloved was The Golden Stallion (1949). Trigger costarred with Roy Rogers in eighty-two movies between 1938 and 1953. Together they made the transition from film to television in December 1951 with the debut of The Roy Rogers Show. Trigger costarred in all one hundred episodes.”

“Little Trigger was, according to both Roy Rogers and Glenn Randall, truly the smartest horse in movies–or anywhere else for that matter. Highly intelligent, he learned quickly and retained more than a hundred cues for tricks and dances. Most astonishing of all, he was housebroken, a quality that allowed him to accompany Rogers on his many appearances in hospitals to visit sick children and into fancy hotels without worrying about an embarrassing mishap.”

To set up an interview or book signing with the authors contact:
Lisa MacDonald, Marketing Director
949-855-8822, ext.3345
lmacdonald@i5publishing.com